Fish pearl unique of the world

The increased availability of freshwater cultured pearls in the market has brought their natural counterparts to the attention of collectors and the trade. Most natural freshwater pearls have been obtained from European waters and in the United States from rivers in the Mississippi Valley. A natural pearl occurs without human intervention and takes on the characteristic color and surface properties of the mollusk in which it forms. Freshwater pearls, whether cultured or natural, are attractive due to a wide variety of distinctive shapes, hues, and overtones. The New York lab recently examined a unique fish-shaped brownish orange pearl measuring 21.34 × 6.28 × 2.81 mm and weighing 2.12 ct (figure 1). The entire nacreous surface was composed of overlapping platelets. We observed no indications of work, such as polishing, that is sometimes performed to improve a pearl’s appearance. One end was wider and more rounded, which bore an uncanny likeness to a fish’s head, with an “eye” and “mouth” also discernible. The lustrous orient along the body narrowed to a rounded point, resembling iridescent fish scales on a tail. Natural pearls are often baroque, and American freshwater pearls in particular are often found as elongated “wing” pearls (J.L. Sweaney and J.R. Latendresse, “Freshwater pearls of North America,” Fall 1984 G&G, pp. 125–140). Energy-dispersive X-ray fluorescence (EDXRF) chemical analysis and observation of X-ray fluorescence showed higher levels of manganese, proving that the pearl formed in a freshwater mussel. No indications of treatment such as dyeing or coating were detected under magnification or using advanced analytical procedures. Real-time microradiography and X-ray computed microtomography (µ-CT) analysis revealed clear natural growth structures that conformed to the pearl’s shape. 3D rendering of the µ-CT data (figure 2) showed a remarkable likeness to a small fish swimming.

This pearl is the property of S. RAWADI

and he alone can put it on sale. 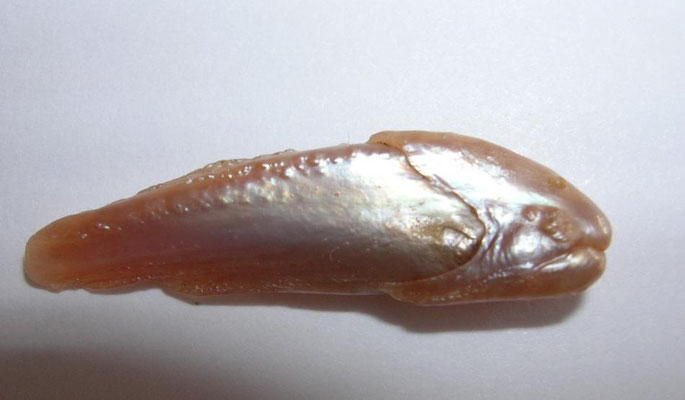 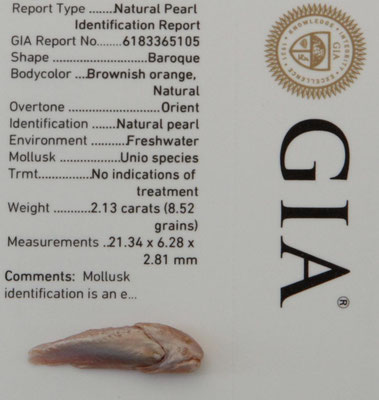